Archaeological excavations as part of highway construction projects started in the 1950s. It was an imperfect situation as archaeologists often worked under the shadow of construction equipment and strict deadlines.

Over the past 50 years, the goals of highway projects have shifted to more demanding, scientific objectives. Federal and state laws now protect archaeological sites and set the standards for research along our nation's highways. These laws demand that sites be protected and avoided if possible. 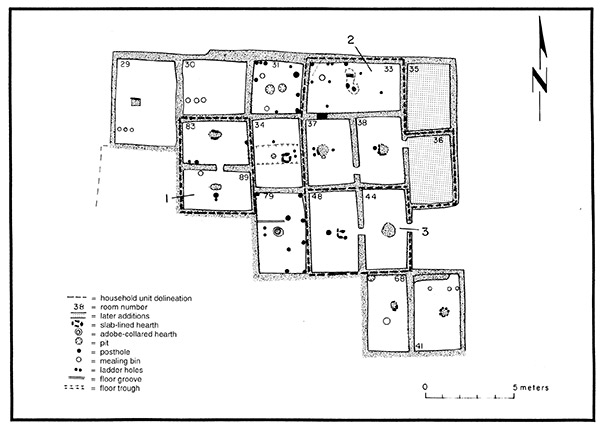 In this sketch, we are looking straight down on the
wall ruins and floors. The sketch also shows
round storage pits, hearths and some artifacts
that were found on the floors. 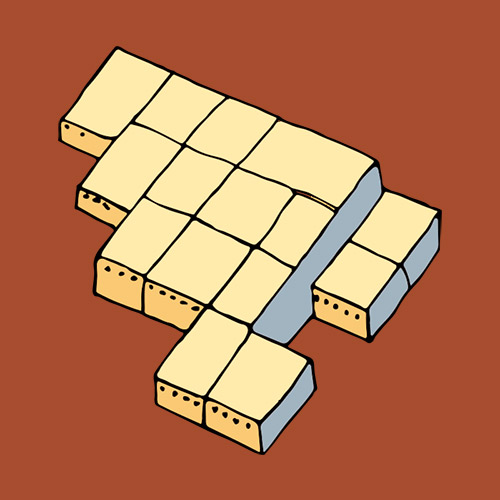 This sketch shows what the East Roomblock
might have looked like when people lived there.
Note the ends of the large roof beams that can
be seen in the walls.

The Ormand Village, a prehistoric site in Grant County, New Mexico, had a very long occupation, with people living there on and off over a period of at least 1000 years. In 1965, archaeologists excavated two clusters of houses, the North and East Roomblocks, at Ormand Village.  This site was in the path of new highway construction, and archaeologists worked to recover as much as possible before it was destroyed.  In 1998, archaeologists re-analyzed material from this early excavation.  Pottery, animal bone and stone tools had all been stored at the Museum of Indian Arts and Culture /Laboratory of Anthropology for more than thirty years.  Using more complex methods of analysis, that were either unavailable or too expensive in 1965, such as ceramic petrographic analysis, the recent interpretations of the data have significantly improved our understanding of the ancient people who lived there.

During archaeological salvage operations at the Ormand Village site in 1965, two of the areas excavated were referred to as the North and East Roomblocks.  They dated to the last occupation which was during the Salado period, AD 1300-1450.  The East Roomblock included 14 rooms with walls of adobe poured or beaten into layers on top of cobblestone foundations.  Large beams ran across the rooms supporting the roof, which was made of layers of smaller sticks laid in a perpendicular fashion across these beams, then sealed with a final layer of adobe. The wall foundations and a little adobe is all that survived for archaeologists to excavate.  These ruins were sketched to show each room and what was found in them.

Information for this exhibit was drawn from the report of the 1998 study, The Ormand Village: Final Report on the 1965 – 1966 Excavation, by Laurel T. Wallace, 1998.
Funding for this exhibit was provided by the Federal Highway Administration, made available through a Local Government Agreement with the New Mexico Department of Transportation, District 5.

Studying plant remains can tell archaeologists what environment people lived in, and what plants they ate and used for construction, tools and fuel. Learn more

Studying ceramics (pottery) can tell archaeologists when people lived at a site, where they came from, and from where they collected clay. Learn more

Tools are formed by grinding and pecking rough stones into shapes to crush and grind a variety of things. Learn more

In 1998, archaeologists reviewed the materials from the Salado period occupation at Ormand Village. Learn more